Highlights of the 2009 buildingSmart conference in Sydney


The 2 day ‘buildingSmart’ conference is the main event amongst ‘Building Information Modeling’ (BIM) supporters in the industry. ‘buildingSmart’ is a global organisation with the goal to promote design collaboration and a streamlined flow of design data across design teams and CAD platforms. In the past few years the focus has shifted on BIM and on the promotion of the standardised design exchange format ‘iFC’.

At this year’s conference, leading practices using BIM nationally and internationally showcased their projects and, by doing so, the successes they had in using 3D documentation models for design delivery. As much as there was certainly progress in the examples provided, it also became obvious that the participants are a group of ‘converted’. Discussions were held in a not too critical manner and they revolved mostly about the current advantages of BIM and the gradual improvement of tools and interfaces. 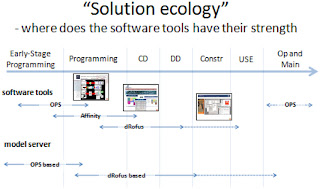 In the course of the first day, Phillip Parker from Hames Sharley in Perth stressed the advantages of BIM on major hospital projects. Phillip pointed out the strenuous changes at Hames Sharley that were required in their transition to BIM. These included alterations to their document administration system, the training of staff, their software and hardware upgrades, longer initial design stages and other additional expenditures. Those increased efforts paid off by a rigorous adherence to BIM standards and they showed successful on a large scale project after a period of 4 months in the project.

Other notable presentations on day one included an introduction to the national BIM guidelines that were about to be issued by the CRC and presented by Scott Beazley and Peter Scuderi, a presentation about building life-cycle analysis in the planning process based on the LCADesign optimisation environment by Delwyn and Murray Jones, and Stuart Bull’s spiel about Arup’s way of collaborating with others using highly integrated 3D CAD environments.

Highlights on day 2 of the conference included Bilal Succar’s (Change Agents) talk on BIM competency where he pointed out a measure to evaluate the BIM capability of a firm from early implementation to successful adoption. Later in the afternoon PC Thomas and Justin Wong from Team Catalyst stepped outside the otherwise tight circle of BIM promoters to highlight issues of Carbon emissions and Environmentally Sustainable Design ESD. PC and Justin pointed out that the smartness in computational design does not necessarily lie in the streamlined exchange of data, but in the assessment of performance targets and the effects that can have on design decisions. Most presentations from that day have been made available to buildingSmart by the presenters and they can be found following this link: http://buildingsmart.org.au/national-conference-bim-collaboration-interoperability
Posted by info at aec-connect at 11:25 PM