Public discussions about BIM by industry bodies such as the Australian Institute of Architect or Consult Australia have been rather sparse since the 2007 RAIA National Conference in Melbourne. At that event, the RAIA held an entire one day parallel stream about BIM, to complement their ‘usual’ program that was less technology focussed.

Since 2007 a lot has happened in the BIM world and the RAIA (now AIA) joined forces with Consult Australia and Autodesk to set up a series of BIM  forums in four major Australian cities. I was invited by the organisers to facilitate the Melbourne and Sydney events in October and November 2010. The forums had the aim to identify the challenges, successes and failures of using BIM to create integrated principles within the AEC industry.

A selected number of 35-40 AEC industry representatives with design, engineering, construction and client background were invited to review key challenges in the uptake of BIM. Those challenges included: the cost of implementation, cultural change, IP Ownership, data manager and security, quality of documentation, improved collaboration, earlier decision-making, the evaluation of alternatives for sustainable design and improvements using analysis during the design process. 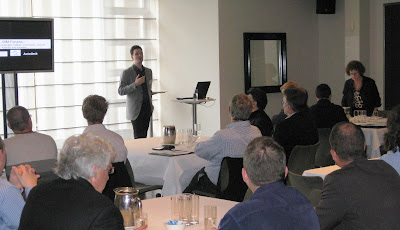 Discussions at all the forums were lively with extensive feedback provided by the floor. During the individual sessions comments were recorded and they were then summarised in a 14 page report titled: BIM in Australia 2010 that can be downloaded here!
Posted by info at aec-connect at 5:20 AM