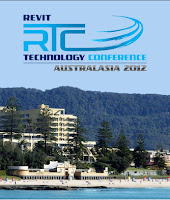 This year's Australian RTC was held in the coastal town of Woollongong (NSW) with a 400+ strong crowd of Revit users and affiliates. Over the past year's the RTC has established itself as the primary user forum of computational design tools in Australia (and it is on the to follow this path with its US and European offshoots as well). Its strength is derived from the mix of hands-on user feedback related to Revit and associated tools, plus an increasing focus on strategic BIM implementation and the use of innovative technology in practice. I presented my paper on the Seven deadly sins of BIM on behalf of AEC Connect  during the 'Principals' Stream' on day one of the three day conference.
Before that though, we heard the keynote from Lee Crockett (21st Century Fluency Project) on current trends in Design Technology and their close connectedness with social media, changes in workplace, and cultural change within our networked society overall. Lee offered us his insights about all of the above in a highly entertaining, yet informative manner.

Given that strategic and managerial issues related to BIM are closest to my heart at this point, I spent most of day one at the principals stream that was kicked off by Rodd Perrey from Architectus and that had several presentation on BIM implementation, Risk management and process change topics on the agenda. Dan Jurgens (Cox) and Belinda Hodkinson  (SKM) gave a highly informative double act on the day to day implementation side, while Bilal Succar (Change agents) underlined once again why he is the man to talk to when it comes to the assessment of BIM Maturity. Bilal showed us the progress of an computational assessment platform that he has been working on for several years now (assisted by his lovely wife) and it seems the tool is just about ready to be launched to the greater public. You can engage with Bilal's tool via the web on: www.bimexcellence.net

I was asked by the organisers to present the current progress of the AIA (Aus) and Consult Australia's joint BIM & IPD Steering group. Luckily there were a large number of working party members and industry affiliates present at RTC and we ended up with an extended discussion round involving key representatives from our group as well as the Australian Mechanical Subcontractor Association (AMCA), the national building specification (NATSPEC), and buildingsmart. Together we were able to inform the audience of the range of BIM initiatives by the various industry bodies and we pointed out the imminent release of the working documents assembled by the AIA/CA group in late August this year.

On day two of the conference I mainly followed presentations that dealt with the periphery of Revit, such as Matt Rumbelow's and Nicholas Broadbent's presentation on games engine technology that can handle Revit models for interactive user checks.  I further delved into the progress that's being made to augment Revit with capabilities of visual scripting for parametric geometry alterations (in Dynamo). Despite promising concepts for introducing a 'Grasshopper' type interface for manipulating geometry parametrically within Revit, there is still a long way to go for those investigating the development of this Add-in aspect to Revit.

I took part in the Revit API discussion - an ever evolving topic since Autodesk has decided to open up the Revit API for better user interaction. The highlight of day 2 for me thought was right at the start when listening to the joint architect/engineer presentation of Chris Razzell (Hassell) and David Foley (NDY). David and Chris explained how they had to reconsider their collaborative process in order to tap into the potential new technology offered them for close collaboration via Revit and Navisworks.

Overall, RTC has shown its worth as the primary time to connect to other users of computational tools in the industry. I hope it will maintain its edge over the coming years as practitioners will become ever more confident in the use of BIM related technology as well as proficient in the implementation side of Revit and its associated products.
Posted by info at aec-connect at 9:22 PM